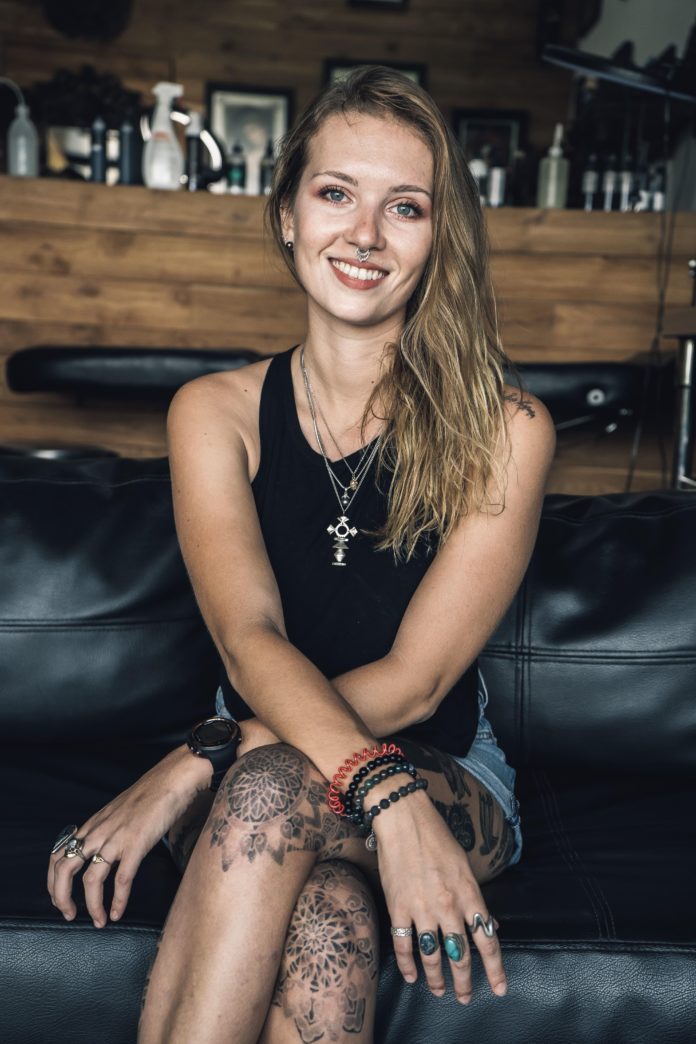 A Parisian life. A job as a stylist. And speed. Laura Frank (Linseï), or how to give everything up and travel across the globe to become a tattoo artist. From New-Zealand to Thailand, passing through Australia, this backpacking tattoo artist aged 27 recently settled down in Strasbourg (France). In her mind, memories of faraway places, but also and most importantly an unconditional love for nature.

You started your career in the fashion world. What did you like at that time?

I would say that textile inspired me more than any other material. What motivated me was the historical, tribal, ethnic aspect of fashion. It is human history, the fact that you can know more about a person by taking a look at what he or she is wearing.

If you liked fashion, why give everything up for New-Zealand?

Precisely because I could not find this ethnic aspect. I have the feeling that today, outside of the haute couture industry, where you take risks to suggest new things, there is no creativity anymore. It ended up being a pretty boring job. It was complicated and clogged.

And what did you do?

I was a stylist’s assistant. But in all fairness, I have never really been involved… It was just a deal I made with my boss. I had to create the style, the design, the marketing… everything. I also had to manage the office because our teams were small, small designers, meaning they had no money to hire anyone. At one point, I said stop. Paris was assaulting me, then something clicked: “Nothing is going to change here, I need renewal. I am selling all my things, buying a one-way ticket to New-Zealand, come what may!”

So you really gave everything up! How did you discover tattoo over there?

In the tattoo world, there is an ancestral dimension. It was exactly what I had been looking for, something that made sense. In New-Zealand, I have learned from Maori drawings, learned how to draw them, about the cultural aspect as well, with the ceremony… It was the most interesting part. Over there, people who are not MaorisNative Polynesian populations of New Zealand. truly respect this culture, they don’t try to appropriate it. It is a kind of beautiful modesty. So, I did the same!

What did you do next, you kept travelling?

I stayed two years in New-Zealand. Then I travelled to Vietnam, Burma, and I went to Malaysia for Sea ShepherdAn international non-profit NGO whose actions are aimed at preserving the oceans., where I have learned to plant corals underwater. I travelled back and forth to Thailand, Indonesia and Australia. It went up to five trips per year. It led me to a pretty cool life, but a bit messy as well! (laughs)

You mentioned Sea ShepherdAn international non-profit NGO whose actions are aimed at preserving the oceans.. Did travelling make you want to take care of the environment?

In Thailand and Malaysia, I also enjoyed myself with others, we put drawings underwater to raise people’s awareness of the protection of oceans. To push them to look at the marine wildlife, just like an exhibition. It was fun to see swimmers observing our works, while keeping a certain distance. It was just like an underwater museum.

What did you conserve from your travels in your tattoos?

Mostly Balinese artArt originating from Bali in Indonesia.. It is a culture that is very close to nature. I was inspired by the carvings, the bas-relief, stone and wooden statues… The island’s craftsmanship is very rich. Then, there is also Thailand, with its heavily decorated Buddhist temples. It is almost too much, but so beautiful!

Does it mean your tattoos are mostly ornamentals?

Yes, but I like being able to master different techniques. For example, I always admired people doing realistic tattoos, characters, animals, so I have been training for this too. But it is true that my current inspiration are ornamental designs with solids. I am coming closer and closer to the tribal aspect, stronger, more geometrical. I also work with black. In my preparatory drawings, I mostly use Indian ink and charcoal, they remind me of earth. Black is a pure color, no need to use a lot to create contrast and deepness.

Our last question: do you regret what you were doing before?

No, I will tattoo till I can’t take it anymore! To me, what I do is not different from fashion, it is just embedded in the skin. When I tattoo a leg, a back or a chest, I imagine it as clothing. It is a marvellous clothing that you will wear on your skin for the rest of your life, it belongs to you. Just like an extension of your identity.