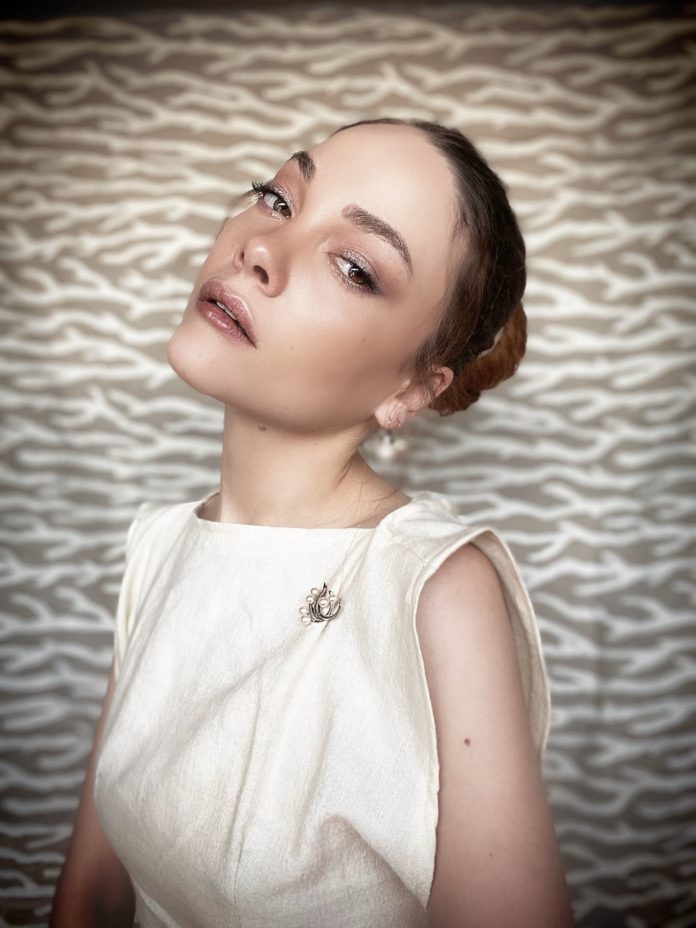 A restless mind in an angel body. Solweig Lizlow is far from the image of a weather forecaster - a beautiful scatterbrained - of the French TV program Grand Journal on the channel Canal + that was sticking to her skin. She has a creative instinct. Music, sewing, cinema and jewelry, she decided to pursue her career abroad. Although she has had painful experiences, she still has her "joy of living" at 28.

It has been almost ten years that your period as a weather forecaster on the Grand Journal is over. You were vindictive at that time. Today, what do you keep in mind?

Ten years already? Oh my gosh… To be honest, my main problem was working with some people that I wouldn’t advise to be around. Unfortunately, people who misuse their power are everywhere. My job was hard especially due to the pressure. But with hindsight, it’s still a privileged world. I was lucky to live this experience.

After being in the media in France, you decided to move to New York. Why?

Because no one told me that my private life would be shared without my consent. It really moved me. I am a very shy person in real life. To be honest, when I was famous and mediatized, I did not recognize the girl they were talking about. One evening, I asked for a divorce and I left with my life packed in a suitcase two weeks later. I made a fresh start just like when you tear the page out of a book.

At that time, you also launched with Charlotte Martyr a jewelry collection called “Capsule”. Was starting this business a way to set you free?

The jewelry collection “Capsule” has been a blessed gift. Charlotte Martyr reached to me one evening and said to me “You draw as many things as you want, I want them to come from you.” I cried with joy! She gave me one of the most beautiful gifts possible – to translate into objects what I invent. Charlotte awakened in me a vital need, to express myself through art and to “please” those who receive it.

How do you express yourself actually?

I’m forming a music band. It’s called Ri’zistens, it’s the phonetic way to express “resistence”. I wanted to find a name that could be pronounced by as many people as possible. We are only two in the band. On the stage, my fiancé is called Muddy and I, Sawave. When we went to visit our friend China Moses who is a singer, we found out that I could sing in London. Since then, we have written an experimental album. Everything is homemade. I only write about past experiences and sometimes painful ones. Music is my outlet.

You’re also in cinema and you recently began sewing, you are on all fronts…

Sewing is really new to me, but I love that! I collect fabric scraps that brands don’t use in Genoa, Italia, where I currently live. I would love to find a way to reproduce my creations in every size in an ethical way. I’m sick of fast fashion. It would be a huge victory to have fewer clothes in our wardrobes. They should not deteriorate even after many washes and we should be able to love them year after year.

Regarding cinema, we have almost finished writing two feature films with my fiancé who is a film director. We had the opportunity to produce one in Canada. We will start soon the pre-production. When I talk about it, my heart is beating so fast! I can’t believe it, I’m excited like a kid.

Why are you doing so much?

I can’t express my emotions in real life. It’s probably due to my traumas. As a result, I am constantly learning new hobbies that allow me to release my emotions in nature and touch people who may feel the same way. An image, a sound or even colors have the magic to be interpreted in thousand ways.

In your art, we feel a trashy side, sometimes a tortured side…

It’s because I’m full of darkness. Sometimes they are soft, sometimes violent. I’ve experienced too much abuse and misadventures to have a light heart now. People always called me the sad clown. I’m extremely sensitive and it doesn’t help. But I try to turn my pains into beauty.

You’re talking about trauma and abuse…

I’m thinking about that misadventure. I was held in hostage in Milan. It was a turning point in my life. I don’t recognize the dangerous situations… I’ve met a lot of bad people. I was a victim of sexual abuse, domestic violence, physical abuse by strangers… including people who have “power” and the sexual harassment that goes with it.

I don’t mind talking about it because I want to help people who are feeling sometimes powerless, just like me. I want them to feel less alone. For example, it helps me a lot when someone talks about their painful past with serenity. I want to be that kind of person for the others. It has been difficult but those persons who hurt me didn’t take away my joy of living. It’s my personal victory that I want to share.