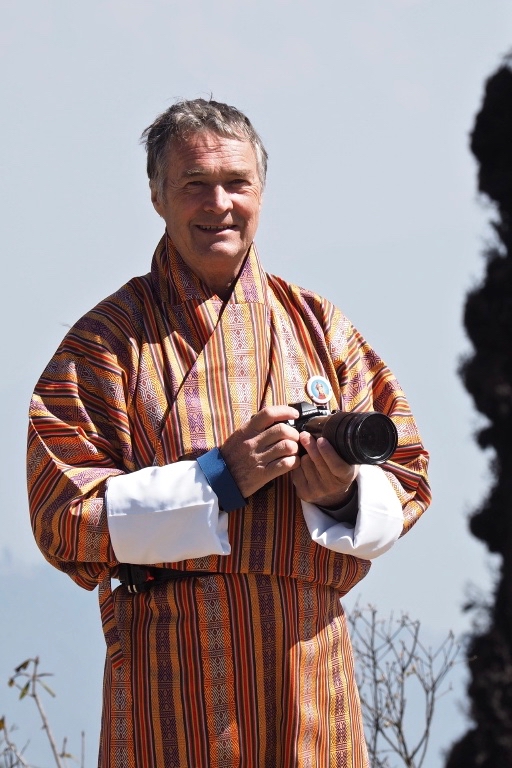 At the beginning of the road, he was dreaming of step-ups. By climbing mountains and by meeting new persons, the French-Swiss Olivier Föllmi found in the art of photography a way to talk about Life. At the top of the peaks, he discovered a human and optimistic philosophy which made him a photographer-traveler for more than 40 years.

At the age of 18 years old, Olivier Föllmi went to Afghanistan. His friends invited him to climb together the Mir Samir at nearly 6,000 meters of altitude. Amazed by the idea of his future trip, the one who intends to become a high mountain guide decides to leave a little earlier and crosses the country alone. “What I was experiencing was so extraordinary, I was so fascinated by those I met that I wanted to share it,” recalls the traveler. Little by little, the camera becomes his privileged partner, and the witness of his adventures.

Travel becomes the photographer’s way of life. For fifteen years, Olivier Föllmi lived between Zanskar, a Tibetan valley in India, and the West. Discovering Tibet was a revelation. “I had the feeling that it was something that suited me perfectly, and that talked to me. I was in tune with the inhabitants, the landscapes, I really felt at home.” The French man fills himself with Tibetan Buddhism, a spirituality that resonates with his photographic practice. “Photography is contemplation. It’s connecting with something that is beyond you, something you try to be in symbiosis with. Taking a photo is a meditation, it’s living in the present, waiting.”

His attraction to Buddhism took a new turn at 20 years old. Victim of a road accident, he was ready to welcome death with a great peace of mind. By being a survivor and amazed by this experience, he tries to find this appeasement in the enclosure of the monastery of Phuktal, in Zanskar. At 4,000 meters of altitude and in harsh conditions, Olivier Föllmi learned patience and perseverance.

“I love the notion that there is a Buddha, the enlightened being, in every being,” he explains. Thus, at the beginning of the 2000s, he travels around the world with his lens, in search of potential Buddhas. An exploration that allowed him to discover new philosophies and religions. But the globetrotter’s path never really diverted from Tibet and its values of altruism and humility.

In 1992, the exiled Tibetan community in India (explanation of the geopolitical context of Tibet and the invasion of 1950 in definition) entrusted two children in adoption to the photographer and his ex-wife, Danielle Pons-Föllmi. He became photographer of the Dalai Lama during his stay in France, eight years later. The artist does not consider himself as a political photographer nor as an activist. “I want to defend the Tibetan cause but in my way, and my way is to make people love this Tibetan world.”

Close-up on human being

For him, the role of a photographer is to convey emotions before anything else. “I am a humanist with a firm stance – show beauty, the richness of humanity and the harmony. I am not interested in violence, in what is negative, in what is wrong,” he says. In order to achieve this, the 60-year-old man’s main objective is not to bring back a shot. His goal is to experience beautiful encounters. Honesty is the foundation of each of his projects. “I take my time with people, I talk, I learn from their life, I share an emotion… Then I ask them to take a pose and I reconstruct an emotion with them. It is not a photo taken in a rush.”

His magic wand to build confidence? Laughter, brought precisely by a small magic kit that he takes everywhere with him. The French-Swiss man is categorical. “I can not bring a serene photo of someone if there was no happy relationship.” Besides, he often goes back to the places he has photographed to find people and tries to stay in touch with them through Internet.

Wishing to give something back, he founded HOPE (Humanity Organisation for People and Education) in 1992 with Danielle Pons-Föllmi in order to support education around the world. “It was important to create an association because I live from those people, from those photos that they offer me,” he says. In the photographer’s mind, freedom requires education.

“If I come on an already specific mandate to go see people, I feel that my relationship is distorted. I have to come empty-handed, with humility and knowing that I depend on these people to take my pictures.”

His conviction also comes from his meeting with Lobsang and Dolma, a young peasant couple from Zanskar in 1989. At that time, Olivier Föllmi was guiding groups in the mountains along with caravan drivers, including Lobsang, with whom he became friends.

In a gesture of love and hope, the couple entrusts their children Motup and Diskit to Danielle and Olivier, so they can receive education. “We had no choice, from one second to the next we became parents and responsible for these children,” he recalls. An indestructible bond was born between two families and two worlds.

Time to change the film

The humanistic aspect of the human being gradually prevails over his photographic side. He is thinking of returning to Asia to work with an orphanage. Living from photography is over. He, who has never retouched the slightest photograph, not even for cropping, believes that he has served his time. “I am sixty years old, I worked almost all the time with film, which no longer exists now, I am a photographer of the past.”

Olivier Föllmi wants to put aside the lens to take up the pen. “I have had the opportunity to live experiences and lifestyles that no longer exist, and I am very happy about that! But I’m no longer looking to be on the podium. It’s time for young people, for a different perspective, a different speech. “While waiting for his successor, photography and travel amateurs will soon be able to immerse themselves passionately in the life stories of Olivier Föllmi.